Search Criteria:
You are currently running searches as a Guest.
Login or Sign Up to manage your searches, or to schedule searches to run automatically. 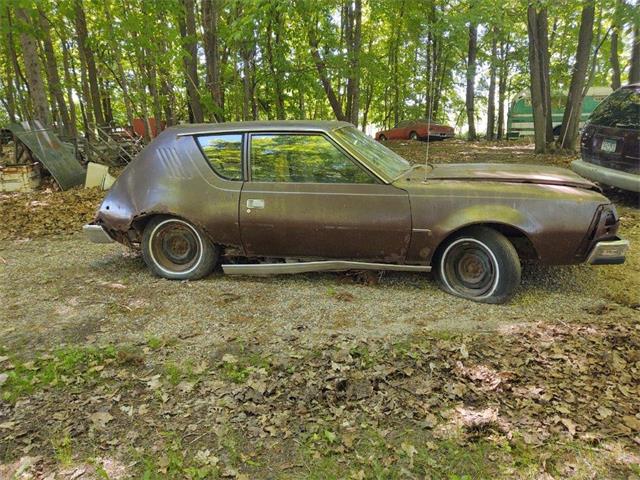 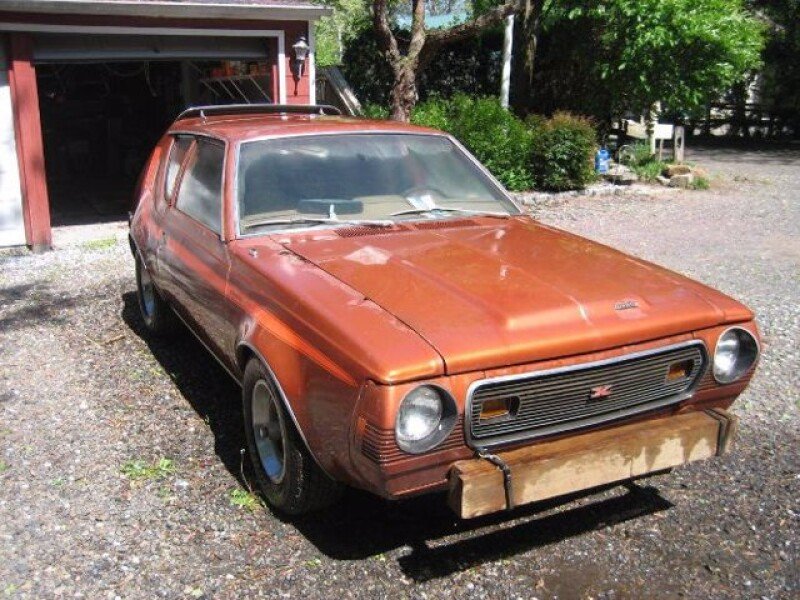 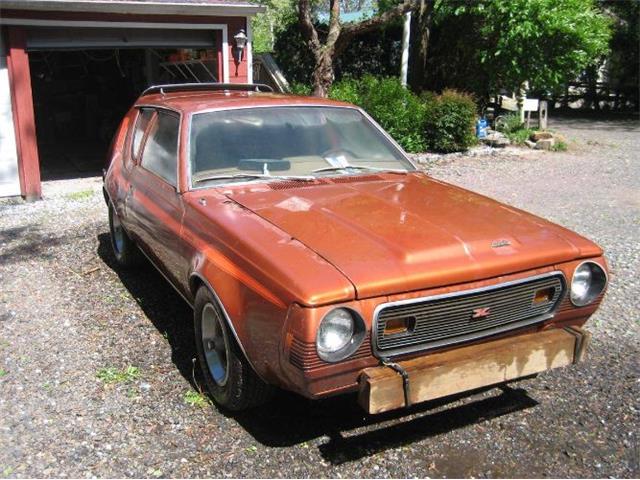 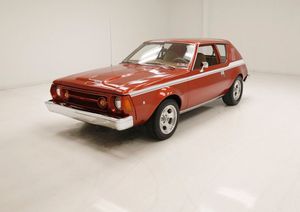 1976 AMC Gremlin
Date: 2022-08-10
Price: $18,500
Location: Morgantown, PA, United States
1976 AMC Gremlin The Gremlin was a response to the imported cars that were invading America's shores-small cars that were light, efficient, easy to park and of notably better quality than the domestics.Though American Motors had always specialized in compact cars, the sudden need for a subcompact could not have come at a worse time for AMC.It was the smallest of what was then called the Big Four, and cash was in short supply, as it was developing the all-new Hornet and had just spent $70 million to buy Jeep from Kaiser-Fraiser. Beauty is in the eye of the beholder, and back in 1976 this writer sought after one of these as I thought it was the coolest thing since sliced bread!And this one brought back that dream that never happened. Here we have a fine example that either you will love it or hate it.The former should come on down to our halls filled with classics and check this 1976 AMC Gremlin out.It has a totally rebuilt engine and transmission, and the interior has been restored.Nice paint and rechromed bumpers and it's off to the races. Exterior With its unique shape only to be surpassed by the next thing to come down the pike: the Pacer, which when talking about things only a mother can love...but I digress.This unique sliced off hatchback car has straight steel with well minded gaps.The grille is all neoprene but it retains the chrome bumper.All panels are bathed in Orange, and a nice white belt line stripe runs from stem too lopped off stern.A stainless steel rocker covering is on and for the large C pillar some highlighting ''venting is noted on either side.The slanted hatchback opens up to reveal a surprisingly large cargo area, and if you flip the back seat down even more.It has a look that is sporty yet utilitarian, wonderful yet a bit odd, but I am still in love!Polished 15 inch Ansen Slots are wrapped by 195/60R15's in the front and larger 235/60R15's in back giving this car a look like it will hustle.All exterior surfaces are just covered beautifully with few faults overall in the new paint. Interior Tan vinyl covers the door panels, and this continues to the front buckets and rear bench with just a bit darker tan for the bolsters and some tuck and roll broadcloth inserts in light tan.The buckets have a sleek design, and the headrests are part of the buckets making a seamless transition to the top.The dash is like new and has been restored.Here we see simplicity at its best with a tan padded dash top, a bump up in the center and some round gauges with machine metal faces behind slightly fogged plastic, all within a black oval.In the center are the temp sliders and a modern AM/FM radio which is digital but looks retro.The everpresent lighter and ash receptacle are just below the new radio.Note the glove box panel is slighty askew, but it does close and stay closed.LED lights are now in and in the center of the hump is a simple tan console with a black plastic knob topper on the shifter.Very clean like new tan carpeting is on the floors, and above is a nice tight headliner. Drivetrain Under the hood within a shiny orange engine bay is a beautifully and fully restored and rebuilt inline 6-cylinder engine in 258ci form.It is painted a beautiful metallic blue and has all new wiring, and a 1-barrel carburetor on top.On the back is a 904 3-speed automatic transmission and a 2.73 rear axle. Undercarriage Underneath some patina and surface rust, but all structurally sound.The engine seems to have an oil drip on the transmission covering which is bent at the edge slightly.You can see the blow back on the structural crossbar behind the engine.Independent coil springs and drum brakes are on the front and leaf springs and drum brakes are on back. Drive-Ability I had to drive this one as it was a lost dream.Fortunately, it was not a nightmare to handle, and it ran beautifully.Smooth shifting although the brakes on this car have a heavy bias to pull to the right, and the driver needs to put a lot of pressure on the pedal.The horn and temp gauge are also not working. An interesting design right out of the mid 1970's and a nice job on the restoration.Is there a Gremlin in your future?What was once ubiquitous is now a classic where few have survived, and even fewer in this condition. VIN DECODE A6E465A131690 A-AMC 6-1976 E-3 Speed Automatic, Floor Shift 4-Gremlin 6-2 Door Sedan 5-Gremlin A-258ci I61-Kenosha, WI Assy Plant 31690-Sequential Unit Number Classic Auto Mall is a 336,000-square foot classic and special interest automobile showroom, featuring over 650 vehicles for sale with showroom space for up to 1,000 vehicles. Also, a 400 vehicle barn find collection is on display. This vehicle is located in our showroom in Morgantown, Pennsylvania, conveniently located just 1-hour west of Philadelphia on the I-76 Pennsylvania Turnpike. The website is www.classicautomall.com and our phone number is (888) 227-0914. Please contact us anytime for more information or to come see the vehicle in person.
Listing Source: Hemmings.com (2548659) - View on 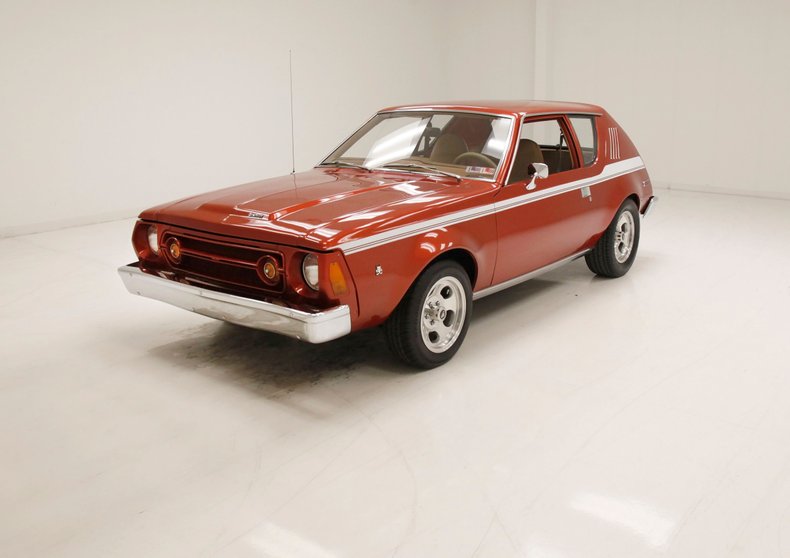 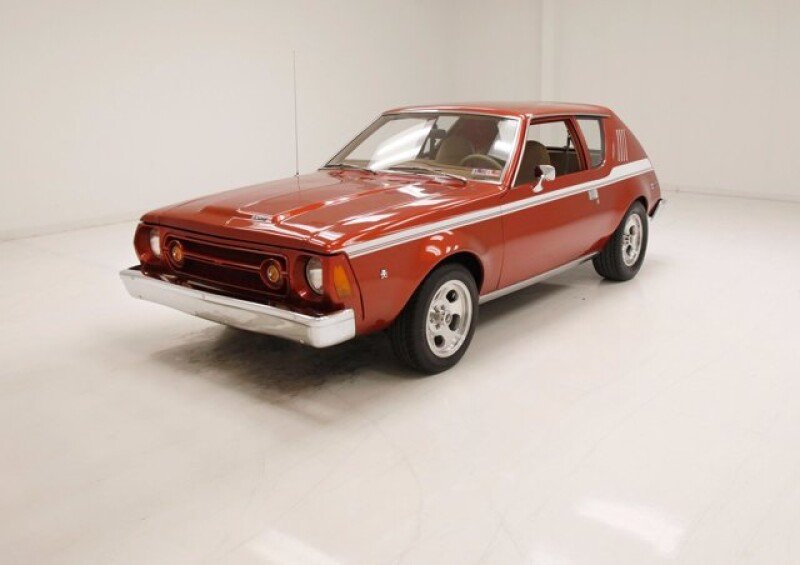 1976 AMC Gremlin
Date: 2022-08-10
Price: $18,500
1976 AMC Gremlin The Gremlin was a response to the imported cars that were invading Americas shores-small cars that were light, efficient, easy to park and of notably better quality than the domestics...
Listing Source: ClassicsAutotrader.com (101680948) - View on 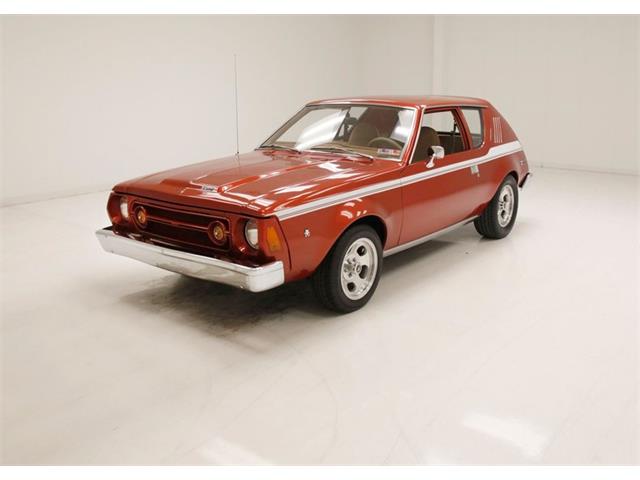 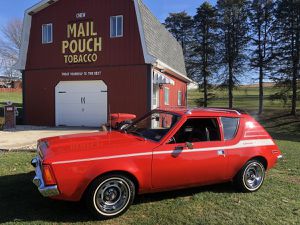 1972 AMC Gremlin
Date: 2022-08-10
Price: $28,900
Location: Latrobe, PA, United States
1972 AMC Gremlin X Out of a long-term collection (20+ years). Just professionally repainted in its original factory color of Code D7 Trans Am Red (with a red and black interior). Completely serviced with a new battery, all new fluids, all new ignition parts, new master cylinder and wheel cylinders, new thermostat, new gaskets, and new NOS trim rings. The Gremlin has a six-cylinder 258 motor with an automatic and power steering. All the lights work and the wipers and washer work. The gas gauge and the temperature gauge do not work, but we are on the hunt for new ones. The heater works. The Gremlin runs and drives excellent and gets tons of attention everywhere. $28,900 OBO - John - (724) 771-5170
Listing Source: Hemmings.com (2549872) - View on 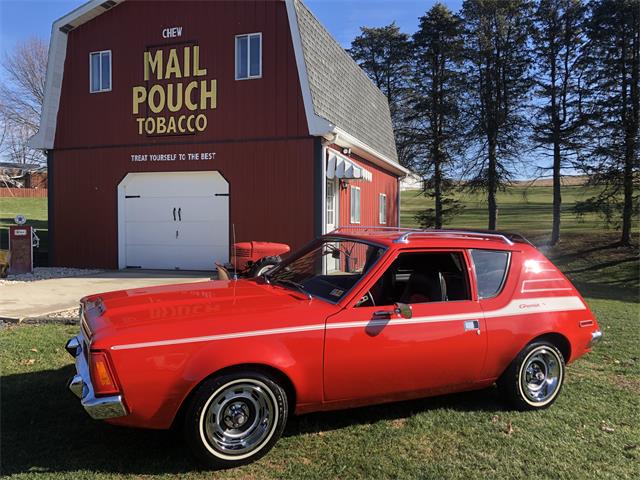 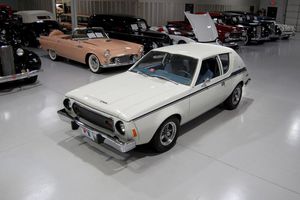 1974 AMC Gremlin
Date: 2022-08-10
Price: $32,995
Location: Rogers, MN, United States
This 1974 AMC Gremlin is an absolute beauty, complete with extensive documentation dating back to when the car was sold new.Back in 1974, the ''Big Three'' dominated out of Detroit but many forget that there was another major, albeit smaller, auto maker hailing from the Motor City, the American Motors Corporation.Originally formed in 1954 by the merger of Hudson and Nash, the American Motors Corporation would be referred to as AMC.Unlike its Big Three competitors, the company produced a number of unique and innovative automobiles.AMC was also an innovator in Detroit when it was among the first auto makers to offer disc brakes and when it introduced the automatic transmission shift indicator that is widely used today (PRNDL).However, perhaps AMC's biggest market differentiator was its focus on fuel-efficient, economy models.When the Gremlin debuted in 1970, it was the quintessential AMC product, promoted as ''America's First Sub-Compact Car'' and was said to have offered the best fuel economy.By the time 1974 rolled around, the Gremlin became especially desirable as the 1973 Oil Crisis was underway and the price of gasoline skyrocketed and its availability became more scarce.The Gremlin was touted in AMC's marketing materials as being ''Unique and fun-to-drive'' as well as a well-built economy car.The 1974 edition Gremlins featured revised styling including a new grille, updated trim, a new thinner rear bumper, among other changes.This particular 1974 Gremlin comes to us with extensive documentation, most which dates back to when the car was new, including the original bill of sale and warranty card.Under the hood is a 232 Cubic Inch Overhead Valve Inline 6 Cylinder engine paired with a single barrel carburetor, that was said to push out 100 horsepower in its day.The 232 Inline 6 is hooked up to an automatic transmission ensuring that anybody can take this baby for a spin around the block.The chrome and brightwork around the exterior of this '74 Gremlin is in wonderful condition.The exterior is finished beautifully in its correct color of Snow White.Riding on P205/70R14 Radial Tires on American Racing Wheels, this AMC Gremlin has a great look and even better ride.The interior on this little Gremlin is superb!The front and rear bench seats are upholstered in blue vinyl which is just how this car came back when it was ordered new.The matching blue dash, door panels, carpeting, and steering wheel all appear to be in their stock configuration and are in wonderful condition as well.The dash is equipped with a 120 MPH speedometer, temperature gauge, fuel gauge, and controls for the ''Weather-Eye'' climate control system.Whether you had one in your younger years and want to re-live your glory days or you want to stand out at cars shows without spending a small fortune on gas driving there, this 1974 AMC Gremlin would make an excellent choice.Give us a call today! *232 Cu. In. OHV Inline 6 *Single Barrel Carburetor *100 Horsepower *Automatic Transmission *Upgraded Radials on American Racing Rims *Sold New in Kentucky *Extensive Documentation *Correct Snow White Exterior *Correct Blue Vinyl Interior *Original Cost of $2,518.90 *Stock Instrumentation *Odometer Reads: 8,706 Miles
Listing Source: Hemmings.com (2581323) - View on 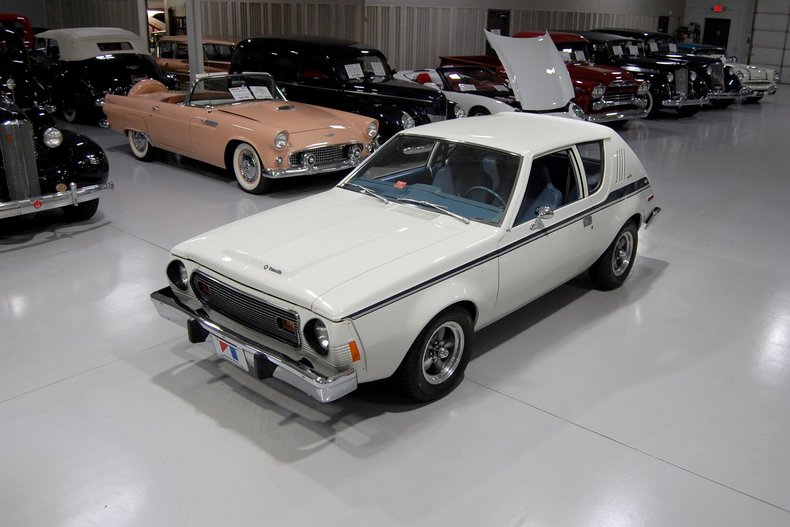 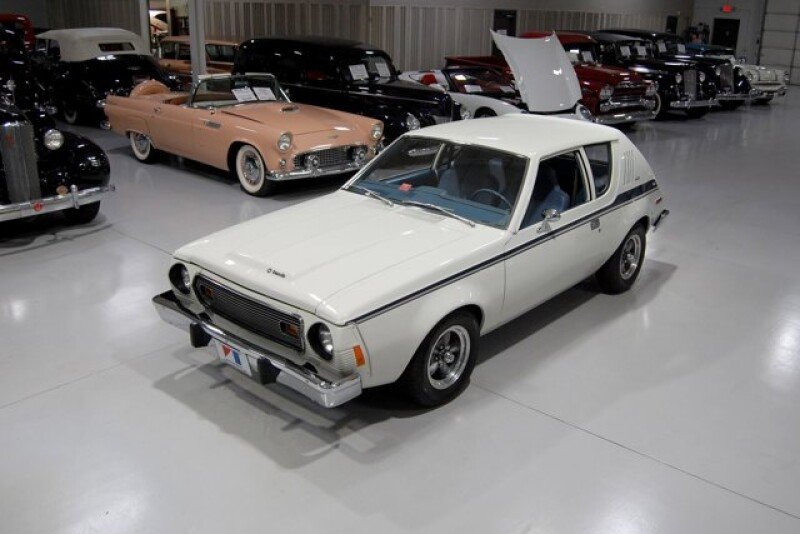 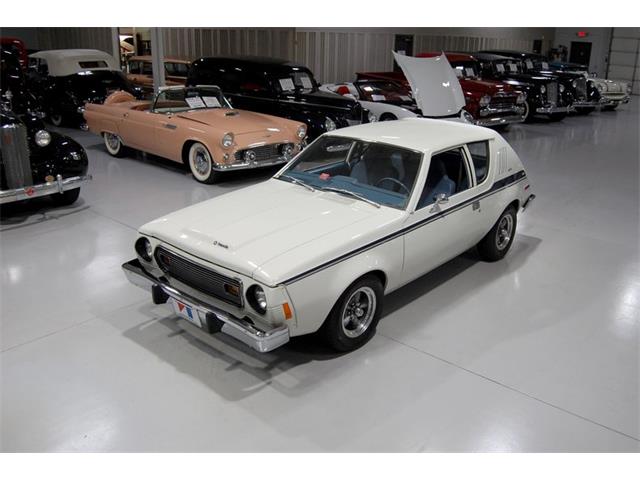 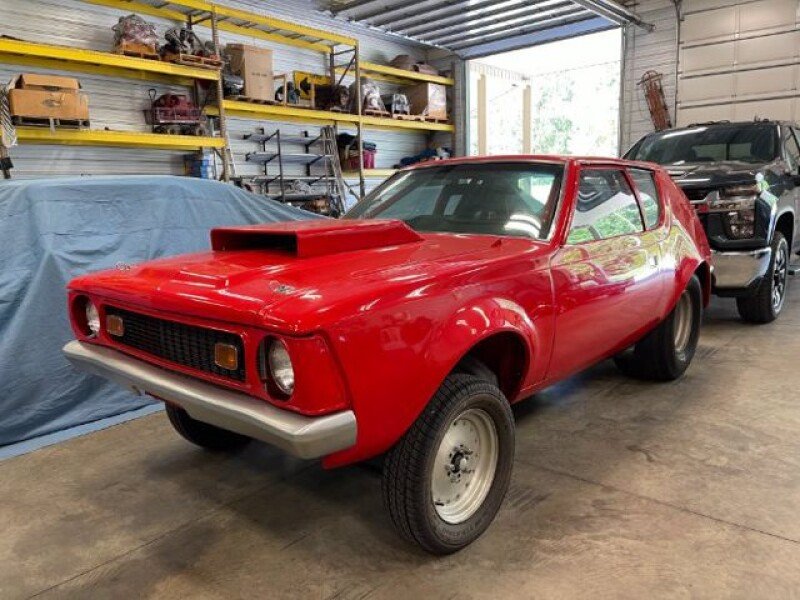 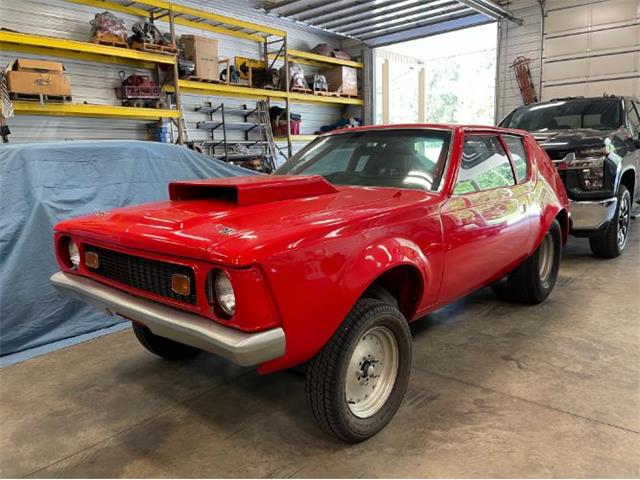